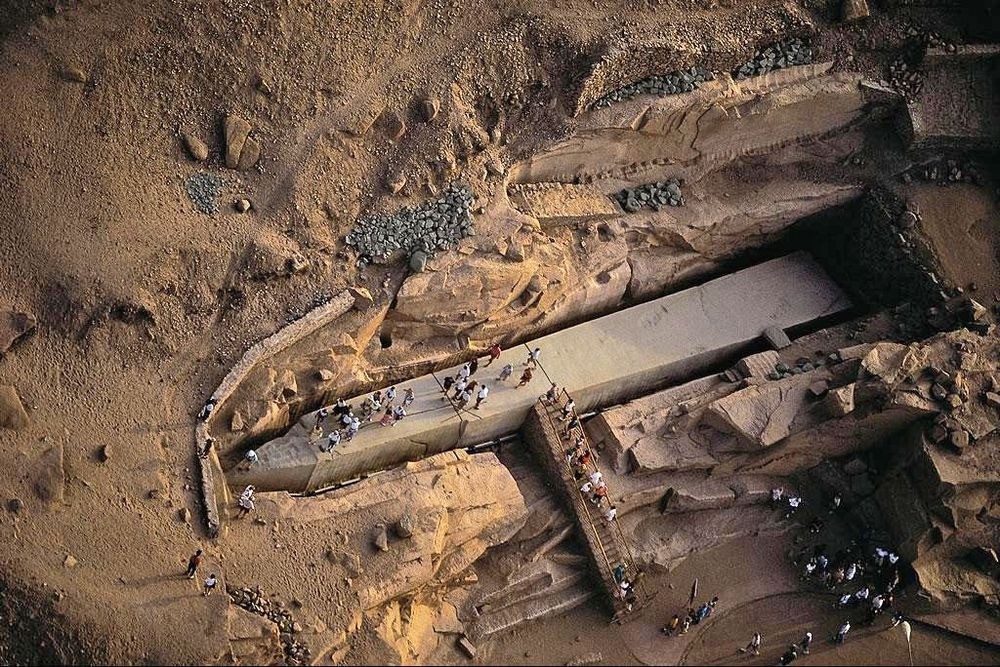 Hatshepsut ordered the obelisk to be created to complete what would later be known as the Lateran Obelisk which was in Karnak in the first place before being brought to the Lateran Palace in Rome.

Hatshepsut ordered the obelisk to be created to complete what would later be known as the Lateran Obelisk which was in Karnak in the first place before being brought to the Lateran Palace in Rome.

Even today, it is located exactly where it was once semi-hewn from solid rock, in the granite quarries near the city of Aswan. This huge block of stone was intended to become an obelisk nearly 40 meters high, weighing over 1,000 tons.

Unfortunately, this was never finished, probably because during the process of separating the stone block from the bedrock, a huge crack opened up, rendering it unusable and of no value to those who had worked through it. hard to create it.

It would have been the tallest in the world, also believed that it was part of a pair of obelisks with the Lateran Obelisk, once located in the temple of Karnak, and which can be found today at the Basilica of San Giovanni in Laterano in Rome.

Subsequently, the holds were repeatedly submerged in water, which increased their size. The expansion of these wedges caused a crack in the rock along the line of the holes, separating the obelisk from the rock below. And this is how the obelisk had to be separated from the bedrock.

Today, the Unfinished Obelisk of Aswan is an open-air museum in the granite quarries where the ancient Egyptian kings cut and transported all the necessary stone blocks that were to be used to build the huge pyramids of Egypt, especially those who stood in the glory of Giza. Necropolis which was used during the 4th Dynasty in the Old Kingdom, for the Kings Cheops, Chephren, and Mycerinus

Egypt tour way company invites you to discover a lot of fun and archaeological things to do in Cairo, as we run some of the best trips that cover most of what to do in Cairo in a day, as our guides will help you see and enjoy at least 10 what to do in Cairo, Egypt has a diverse heritage which includes many neighborhoods like, Coptic quarter, Islamic quarter Cairo and also a visit the kings of the pyramids of Giza, a quad bike to the pyramids of Giza, a visit to Mount Sinai from Cairo, Siwa Tours from Cairo, White Desert Tours in Egypt.

Day tour to Abu simbel From Aswan by Private Vehicle

Day tour to Abu simbel from Aswan by Flight

Egypt has filled in as truly outstanding and most secure traveler goals for quite a long time. Encompassed by warm Egyptian friendliness, considerate and kind-hearted local people you're going to feel comfortable and as sheltered as you'll ever be. With some Sensible precautionary measures and arrangements, you will have the option to investigate Egypt visits and trips and make the most of Egypt's commonly exceptionally safe urban communities without any difficulty. Flaunting a generally low crime percentage guests will be more than safe particularly in territories every now and again visited by travelers.

Generally, it is safe to travel to Egypt for a vacation where there are outrageous techniques for security, for example, check focuses on each vacation spots, shopping center, museum, and so on.

How might I acquire my visa to visit Egypt?

Guests and explorers to Egypt are required to convey a visa legitimate for at any rate a half year from that point appearance date. Be that as it may, with an end goal to rejuvenate the travel industry in Egypt the accompanying nationalities can buy a 1-month passage visa on appearance. The Nationalities that profit by the previously mentioned exemption are Australia, Canda, Croatia, the European Union, Georgia, Japan, New Zealand, Norway, Macedonia, South Korea, Russia, Serbia, Ukraine, United Kingdom, and The U.S.A. The Process for gaining these section visas is amazingly straightforward and just takes an unimportant couple of minutes through any bank window before continuing to customs.

What can female tourists wear in Egypt ?

The clothing standard in Egypt for ladies is viewed as a traditionalist by western gauges and it is aware to comply with this code. For men it isn't generally an issue - typical pants and shirt or T-shirt are fine - however, in Cairo, it would not be satisfactory to wear short shorts or tank tops/sleeveless tops.